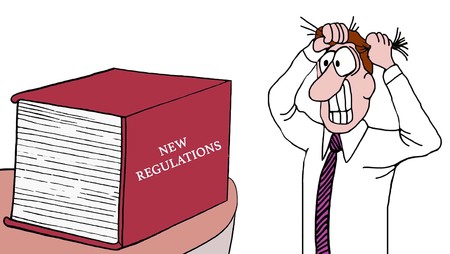 Shortly After Donald Trump Assumed The Duties Of President:

He ordered Treasury Secretary Steven T. Mnuchin to prepare three reports on the financial regulations in the U.S. and then dismantle the Dodd-Frank Act and other strict Banking Regulations.  The first report of 150 pages was released on June 12 and discussed the Dodd-Frank Act.

The report is a report. The comments are proposals and to be used as guidance for President Trump. The report is similar to the House Bill recently passed, but according to most experts it is more moderate. Looking forward to more meetings between Mnuchin and Elizabeth Warren.

What The Report Recommends:

It recommends more regulatory control of the Director of the Consumer Financial Protection Bureau allowing the President to fire any Director for any reason and not just for cause as it stands now.

Also, Mnuchin believes the Bureau’s definition of Qualified Mortgage gives Fannie and Freddie an advantage over private banks. Another section states that underwriting should be modified so that self-employed citizens can more easily qualify.

What The Treasury Thinks About It:

The Treasury believes that some of the anti-redlining regulations such as the Community Reinvestment Act and the Home Mortgage Disclosure have seen their day. The report states that the measures inhibit banks from lending in low income areas which is the stated reason for the rules.

There Is One Other Comment That I Thought Was Interesting:

Currently, if someone complains about a bank, credit card company, loan servicer, or other financial company, the complaints are listed on the CFPB website, where everyone can see them including Mr. and Mrs. Public. This report says that those comments should be only for official eyes.

Well, after almost five months of a new administration I have heard nothing about abolishing the CFPB, just drastically changing it. The SAFE ACT which established the requirements for education of State Licensed Mortgage Loan Originators has not even been mentioned. Please Mr. President, do not change those rules. Just make the rules for CE include FDIC originators.

So many ideas, so much to ponder.

Being in the Education Field, the regulations are numerous, ridiculous, and difficult to understand for everyone.

However, on the other side, after decades of working with Banks I have come to the conclusion that banks cannot be trusted to regulate themselves and the free market place has developed Keating, Madoff, Mazzoli, Milken, Ponzi and others.

Where is George Bailey when we need him so badly?

Recognized as a leader in California Real Estate Continuing Education for Licenses Renewals and Notary Commissions. Provides courses for thousands of Californians to qualify for Sales & Broker Licenses with Internet and Open-Book Testing. Furnishes outstanding preparation materials to allow students to pass the State exams on their first attempt. Duane Gomer Education has presented hundreds of LIVE NMLS Renewal Courses, the 20-Hour LIVE NMLS Pre-License Courses, and 8-Hour LIVE NMLS Federal Exam Prep Courses all over California. Procedures are State-of-the-Art with Internet Testing, Automatic Grading and Certificate Printing, Website, etc. Presents live classes on how to make more money in less time in Real Estate.
View all posts by Duane Gomer →
IRS Is Now Hiring Debt Collectors
If You Are Not In The Obit, Eat Breakfast