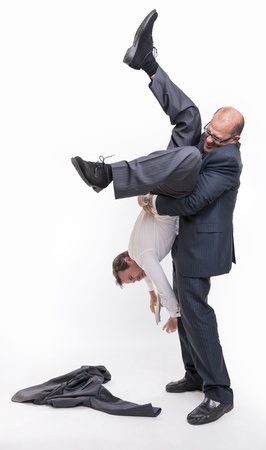 From An IRS Announcement In June 2017:

The Internal Revenue Service began a new private collection program of certain overdue federal tax debts selecting four contractors to implement it. A bill passed by Congress in December 2015 requires IRS to use these agencies.

The contractors must follow the consumer protections of the Fair Debt Collection Practices Act. Most of these accounts are older, overdue accounts where IRS does not have the resources to attempt collection.

IRS will send written notices to the pursued. The agencies will send a separate letter to the non-taxpayer. The IRS will do all they can to help citizens avoid confusion in light of the constant telephone scams. For example, money must be sent to the U.S. Treasury not the collection agency.

If you have any questions now or when you get a letter, visit IRS.gov. There is a section called Tax Scams and Consumer Alerts. Now you be careful out there.

For so many years, I have always felt secure when I was talking to someone from the IRS

Now I do not know. Years ago, there was confusion about a large IRS payment due on an apartment house where I was just voted into the project by the partners as General Manager. We had received an agreement from IRS that it was going to be worked out.

One Bright Morning On A December 24th:

A young man in a suit appeared at my door and demanded the payment. He showed his Treasury credentials and announced that he was going to take our cars and any other things of value. I said that the General Partner was Duane Gomer, Inc. and everything in the house belonged to DJ and Duane Gomer. It did not make any difference to him.

After much verbal exchange I said, “Let’s start with the assumption that I am not going to pay you since I have this letter of agreement. How can we settle this?” Then, as if he had a sudden burst of knowledge, he said, “If you agree to sign an extension of the Statute of Limitations for this case, I can accept that.” Over and done.

One Funny Aspect Of The Encounter

As we were arguing, really arguing, I looked over my shoulder. On the upstairs landing, my supportive wife and daughter were peaking one eye around the corner of the wall. I guess that it was everyone for themselves.