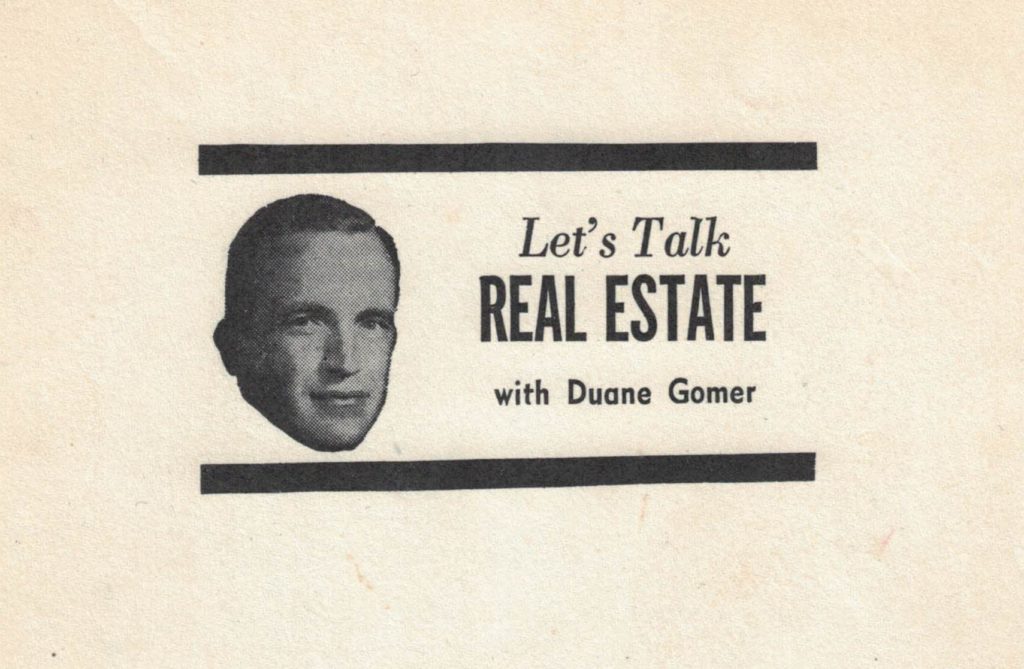 There are six people who are outstanding writers, they are students of Duane Gomer Education past and future, and I consider them all good friends.

Number 6 in our series is a person from the deep, deep past.  Note the photo.  This is Duane Gomer circa 1964, Columnist for The Van Nuys News and Valley Green Sheet (now the big-time LA News).

At the time he was starting a Property Management company based in Sherman Oaks, CA.  He was also an instructor in the outstanding Adult Education Program at UCLA to find clients.  Prior to this he had been Director of Property Management for the Forest E. Olson Company, after returning from five years in Germany.

If you should want to get an intensive cram course in apartment house management problems, I have a recommendation.

Go visit the Van Nuys Small Claims Court and hear some of the cases presented.

Last week I had a small claims action against a former tenant. My case and many others ended in a default judgment as the defendants did not appear. However, in the hour that I attended the court, over 50% of the cases heard involved real estate transactions.

Also, many of the plaintiffs and defendants were people that I knew from the real estate field. It is an interesting way to spend a few hours. It is much better than television. If and when I retire, I think that I’ll attend courts for entertainment and enjoyment

Many of the cases are taken under advisement by the judge and no judgment is rendered at the time of the trial. The principals are notified by mail in these cases.

The Santa Monica small claims court now notifies all their people by mail. When judgments were given in the courtroom, there were too many fights in the hallways between the losers and the winners.

If any case was of interest to you, you need know only the names of the people involved and you can check the judgments later, because the results of the actions are public record.

In one case the property manager for the owner was being sued for the recovery of a deposit made on a rental. The plaintiff had not rented the apartment because, in his words, his situation had changed and the painting requested in the deposit had not been done two days later.

The property manager had gotten bids on the painting, and it was to be done in time for the prospect to move in. The judgment in this case was for the defendant.

In another instance, an owner had attempted to notify managers that their services had been terminated. The managers had not accepted a registered letter that was used for this purpose.

The managers had lived on past the time of their termination without doing any work and without paying rent according to the owner.

The managers claimed that they had collected rents past this time but they had no records to prove it.

The managers were an attractive young couple with a cute 3-year-old daughter and a very small baby in arms. The judge ruled for the owner in this case because the managers had refused to accept a letter according to U.S. Postal records, had no proof of their working and a new manager had been appointed and had been working.

The important question asked by the judge in another case was about fixtures versus personal property. A man had moved from a house and taken some light fixtures that were decorative but which had been screwed in the wall with permanent screws.

The plaintiff, who was the new owner, recovered the amount of the value of the fixtures.

An owner and a tenant had a disagreement concerning the time notice to move was given by the tenant. The judge’s ruling was that the notice by a tenant can be given at any date and does not have to be given at the due date of rent.

However, even with no written lease or agreement, the renter must give a 30-day notice of moving if their rent is paid monthly, and a seven-day advance notice on a weekly rental.

A tenant had sued a landlord for a small amount for a back injury suffered because of “leaves and debris on the stairway.” The owner, who lived on the property testified that he cleaned the steps regularly and that the leaves on the stairway were a few small leaves from an overhanging tree. The judgment was given in favor of the defendant.

Another tenant had moved out on a lease because a certain painting had not been done correctly at the beginning of the lease which was 10 months before. The complaint on the painting was that the correct colors had not been used.

The owner sued for some additional rent past the date that the man had moved and before the apartment had been rented again.

He won his case, because the difference in color did not seem to be of primary importance because the tenant had lived in the apartment with these colors for 10 months.

There were many other important facts present but the defendant won his case.

There were a few other apartment management questions settled during this time. Also, there were some cases involving auto accidents, recovery of purchase money for a car, a man who wanted to get a neighbor to pay half of a common wall although no agreement had been made beforehand (he lost), and many other interesting cases.

This was all in less than an hour.

As I stated before in this article, an owner or manager could acquire a great deal of apartment knowledge by just attending small claims court sessions.

Recognized as a leader in California Real Estate Continuing Education for Licenses Renewals and Notary Commissions. Provides courses for thousands of Californians to qualify for Sales & Broker Licenses with Internet and Open-Book Testing. Furnishes outstanding preparation materials to allow students to pass the State exams on their first attempt. Duane Gomer Education has presented hundreds of LIVE NMLS Renewal Courses, the 20-Hour LIVE NMLS Pre-License Courses, and 8-Hour LIVE NMLS Federal Exam Prep Courses all over California. Procedures are State-of-the-Art with Internet Testing, Automatic Grading and Certificate Printing, Website, etc. Presents live classes on how to make more money in less time in Real Estate.
View all posts by Duane Gomer →
Peter Boutell: Lending A Hand
To Call Or Not To Call – A Quick Do-Not-Call Summary